I Now Track the Most Important Measure of the Fed’s Economy: the “Wealth Effect” and How it Impacts Americans Individually | Wolf Street

The Federal Reserve is pursuing monetary policies that are explicitly designed to inflate asset prices. The rationalization is that ballooning asset prices will create the “wealth effect.” This is a concept Janet Yellen, when she was still president of the San Francisco Fed, propagated in a paper. In 2010, Fed Chair Ben Bernanke explained the wealth effect to the American people in a Washington Post editorial. And in early 2020, Fed Chair Jerome Powell pushed the wealth effect all the way to miracle levels.

Today we will see the per-capita progress of that wealth effect – what it means and what it accomplishes – based on the Fed’s wealth distribution data through Q4 2020, and based on Census Bureau estimates for the US population over the years. Here are some key results. At the end of 2020, the per-capita wealth (assets minus debts) of: 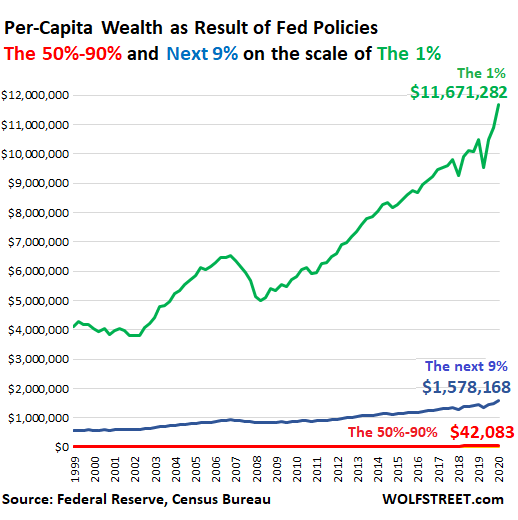 This is just insane, especially if you consider that no actual wealth is being created. The units of account are just being changed so that the wealth created is divided differently. This stark and growing inequality is causing, I speculate, in ways not well understood, the proliferation of the crazy and violent politics of our era. It's madness, I tell you, madness!

The distribution of wealth arises naturally from differing success in using free markets, and differing policies towards frugal living. This might once have been argued in good faith.

But you can't really say that in an era of (i) crony capitalism, and (ii) money printing intended to make financial assets more valuable.