Picture of TAS, LWJ, and sons Mark and Patrick, with his girlfriend Whitney, and various dogs, including Mitzi, our new Pit Bull 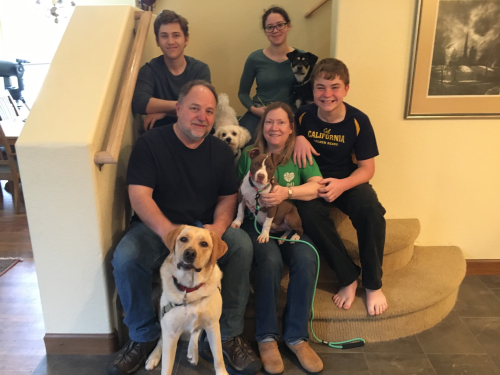 This is a partial family portrait of, from front to back, Chopi, me, Gandalf the Lion Hearted, LWJ, Mitzi the Wonderful dog unit, Mark, Patrick, his girlfriend Whitney, and Samwise, recently sort-of rescued from Shanghai, the People's (not Dogs') Republic of China. Chopi, my and secondarily our Labrador Retriever, is like most labs, intuitive, intelligent, rambunctious, and all dog. But the point of this post is to draw your attention to our new Pit Bull mix, whom LWJ is naming Mitzi, after her great aunt (no longer with us) who resembled a pit bull in life. She hailed from Austria, was a cook for the world champion Joe Lewis (and once saved his son from being suffocated by his nanny), and was shaped like a V, as Pit Bulls are. Mitzi the dog is a rescue and was taken in an emaciated state from the streets but is now a fit 4 months old. Mark, who's grinning like a crazy man, is very happy with the new puppy. The puppy is  very happy with her new home, I think it is also obvious, if not from this picture, then from her having slept through the night, pooping outside, eating heartily, and playing with other dogs.

LWJ has been reading about Pit Bulls, their trials, how they are discriminated against, their sufferings at the hands of miscreants like Michael Vick, and decided she would do something about it. Hence, our new puppy.

Gandalf, the Bichon Frise in the middle of the picture, if called the Lion Hearted because he somehow fought off the attack of a large coyote when I was supposed to be looking after him. I don't know how he did it. I saw the coyote and it was large. I do know he made a tremendous racket. He required two surgeries. He seems a bit put out by the new puppy but is basically OK.

The lab is a nice Downton Abbey touch. The Earl of Jamul, Lady Jeanne, ......

great to see you all after following the blog and hearing about the family for so long!!

Thank you so much for sharing that with us. You just went from abstract internet guy (with, it must be said, a mother who tangled with bears) to super congenial family with awesome dogs.