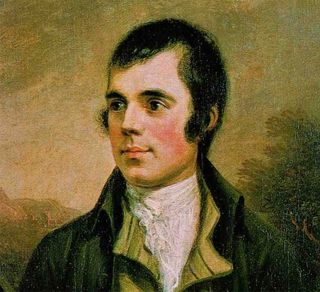 Today is Robert Burns's birthday, time for all of us who are Scots, part Scot, or wish we were, to celebrate the incredibly rich heritage the Scots have left to us.  It would be a long list, but let me just mention David Hume, Adam Smith and the Scottish Enlightenment, a movement with which Burns was associated, not to mention the American Founding, and of course the great amelioration or at least temporary respite of the troubles of mankind that is Scots whiskey.

Here is one famous lyric of Burns, often called "For a' that, an a' that":

I have no Scottish blood that I know of, though I suppose my WASP father and his ancestors might have had some Scottish blood unbeknownst to me.  My mother's sisters both married into Scotland by marrying, one after the other died, in fact, the descendant of an old Scottish pioneer family in Idaho, the Laidlaws, which went there to raise sheep and hell, not necessarily in that order.  My uncle Sandy then was the classic Scottish terrier of a man: small and, uh, peppery (to say the very least), he fought with Gen. Patton in the war and could probably have outcursed him. Boise's now lost and unlamented Cub Club allegedly banned him for foul language.  Family feuding and onerous death taxes forced him and his brothers to sell the ranch in the 1950's and by then his beloved eldest boy had been killed on a highway while herding sheep, which changed my uncle permanently, everybody said.  This was a real shame, as the family had been quite significant in the history of the sheep industry in the American West.

His second wife, who pretty much smoked and drank herself to death at a young age, was my favorite aunt and I like to think, I her favorite nephew. Many was the scrape she got me out of with tyrannical nuns by concocting the most outrageous lies on my behalf.  I would entertain her by singing my version of Louis Armstrong songs.  Possibly the Scotch helped her find me funny.  She I should perhaps mention, was Irish, not Scottish.  In spite of smoking numberless packs of Camel unfiltered and a bottomless supply of Scotch (the empties of which he and his wife would drop off at Salvation Army donation booths) my uncle lived to old age.  When his father died, the ground had been frozen so solid in Muldoon they used dynamite to blast out a hole, and made one big enough to bury a pick up truck.  My uncle though is buried on Morris Hill near my father and other relatives.  Anyway, let's hear it for Scotland.

TrackBack URL for this entry:

It was kin of mine who introduced golf to the area of Le Mars, Iowa.

being happy means many things, happiness lies in how you see your life, and from that point of view, I enjoy reading articles about it, thanks for sharing information